We complete the NDA Exam Syllabus with three months & allow the students to come institute until the crack of the exam. But question is that who provides best NDA Coaching Center in Chandigarh. The answer is Surbhi academy. Because our work-study module is based on 100% practically training, not theoretically.

Our Silent features for NDA Classes in Chandigarh

Defense Services Job is considered a very prestigious job in Indian society. Not only it gives you a great satisfaction of working for your motherland but also gives you may be the benefits when you are in service or after retirement which is not given to civilians. We provide top NDA Coaching in Chandigarh, Panchkula, Mohali.

What is the NDA Exam?

The National Defence Academy (NDA) is the Joint Services academy of the Indian Armed Forces, where cadets of the three services, the Army, the Navy, and the Air Force train together before they go on to respective service academies for further pre-commissioning training. The NDA is located at Khadakwasla near Pune, Maharashtra. It is the first tri-service academy in the world.

NDA alumni have led and fought in every major conflict in which the Indian Armed Forces has been called to action since the academy was established. The alumni include 3 Param Vir Chakra recipients and 12 Ashoka Chakra recipients. National Defence Academy has produced 27 service Chiefs Of Staff to date. Current Chiefs Of Staff of the Army, the Navy, and the Air Force are all NDA alumni.

If you are looking NDA Coaching in Chandigarh. Surbhi Academy is the best option for you. We can help you to crack the exam.

The DOB mentioned in the Matriculation/Higher Secondary Examination Certificate available or an equivalent certificate will be considered by the commission. 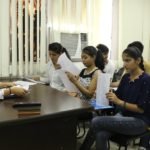 Candidates will be given admission to the above courses based on their written exam result followed by Intelligence & Personality round.

The process of NDA SSB – Interview after Clearing Written Exam

How to Pass NDA Written Exam

There are two papers in NDA written exam one is Mathematics and the second one is General knowledge. The important chapters that are included in Mathematics are Differential Calculus, Integral calculus and Differential equations,  Algebra, Matrices and Determinants, Trigonometry, Analytical Geometry – 2D and 3D, Vector algebra, Statistics, and Probability.

Now, once it involves NDA exam preparation, it varies from candidate to candidate everywhereAsian nation. Candidates are going to get listed in B.Tech faculties of the nation through JEE (joint entrance exam), they begin their preparation for the primary year or when finishing their intermediate by dropping for one year.

So. as JEE aspirants are thought of they’re going through some hardcore preparation for his or her examination with the assistance of some personal establishments. Also, the information of JEE contains nearly 60-70 p.c of the NDA communicating information, thus for such candidates (JEE aspirants) NDA exam preparation isn’t terribly robust, the amount of queries asked in NDA written communicating is of their level for these candidates.

There are also, some of the candidates who had set their goal to join Indian Armed Forces when they were doing their matriculation. For NDA exam preparation all, they have to give little more attention to the concepts that are common between their school syllabus and NDA exam syllabus. Daily one hour practice is enough for NDA exam preparation Since they have ample amount of time before writing the NDA written exam.

They should build a note of the topics that they’re smart at and keep active on it; conjointly they ought to attend personal tuitions for the ideas on that they’re weak and provides their hundred % to cope up with the competition. there’s nothing wrong with late preparation it’s all regarding labor here, however, the career offered by NDA is definitely worth the stress.

How to Apply for NDA

The Mathematics paper covers the following chapters and topics:

The next step is the intelligence and psychological test which is conducted by the SSB (Service Selection Board). The intelligence test section is done if students have qualified the written aptitude test. The interview is based on both intelligence & personality basis

Why choose Surbhi Academy for NDA Coaching in Chandigarh?

Surbhi Academy is the pioneer in Best NDA Coaching Institute in Chandigarh. We believe in imparting well balanced, realistic and practical approach to teaching so that the aspirants get phenomenal opportunities to constantly hone and upgrade their skills.

There are a number of reasons why a candidate should join Surbhi Academy as we provide Best NDA Coaching in Chandigarh. A few of them are:

After Passing out the three years, candidates are awarded graduation degree affiliated to Jawaharlal University. The Passing out Parade that is held at the successful completion of 3 years is a spectacular event.

On successful completion of training, Gentlemen Cadets are granted Permanent Commission in the rank of Lt. subject to being medically fit.

How can I get admission in NDA?

To join National Defence Academy a candidate must appear in the entrance exam conducted by Union Public Service Commission, twice a year, normally in month of March and August. Candidate must be a unmarried male. To join NDA one must pass written followed by SSB, medicals and finally to be in merit list.

The NDA exam is difficult; however, it is not so difficult if the candidates start preparing from an early stage. for free demo classes you can click here

What is the Fee for NDA Exam Coaching in Chandigarh?

Which is the Best NDA Coaching Academy in Chandigarh?